📦 WE SHIP WORLDWIDE! FREE SHIPPING FOR UK ORDERS OVER £100 📦

*Finally get diagnosis you've fought years for* My brain: are we sure that's right?

oooo, it turns out being medically gaslit for years does have an impact. Who would have known? I found out that for years I have had an incorrect diagnosis and in fact I don't have fibromyalgia but do have subclinical hypothyroidism. 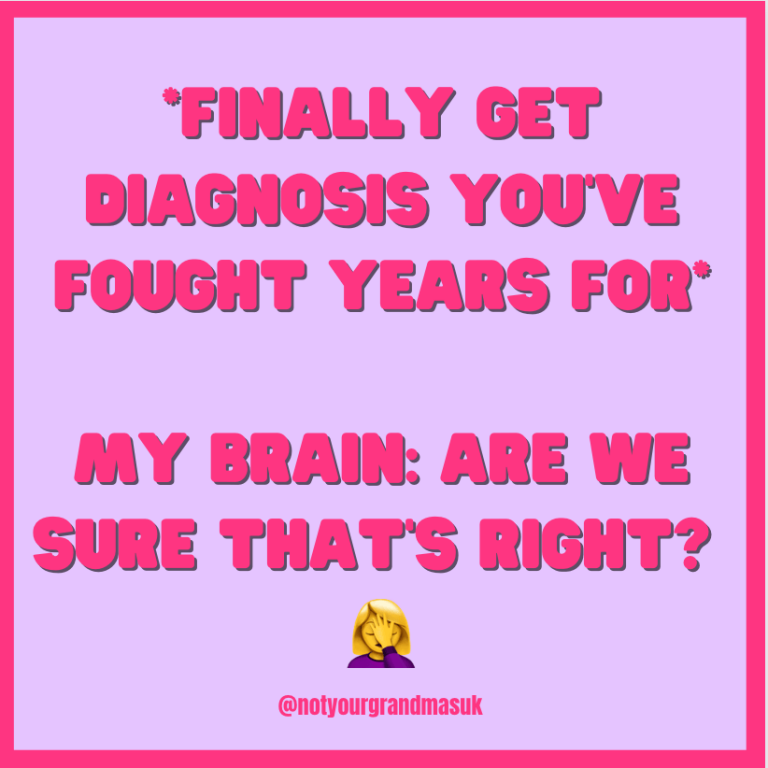 I fought and won – so why doesn’t it feel like a victory?

It took three years, four doctors and one complaint to get here. Along every step of the way I had professionals telling me I was totally wrong. That I was seeking a diagnosis (as opposed to what exactly…just accepting subpar care?) and that I just wanted a cure (who doesn’t?).

I was told that I needed to just have a period, that I was being hysterical and that even if I was sick they would wait until my numbers were ‘in range’ (aka sit and do nothing) before they would even consider medication.

Throughout it all, I held my nerve and backed myself but what I didn’t prepare for was actually getting diagnosed. I had been so consumed with the fight – chasing my records, finding the right doctor and making sure all the right tests were actually happening – that I never stopped to consider what it would be like to finally be proved right.

The shock of eventual diagnosis

When a correct diagnosis finally happened my brain just couldn’t cope. I spent weeks being afraid my final test results would come back negative, even though I knew they had shown it before. I didn’t believe it when my doctor told me I had the lowest vitamin D levels she had ever seen and no wonder I felt dreadful. All I could keep saying was “are you sure?”

I knew I had medical trauma, I understood it on an intellectual level, but I never really realised the impact until then. I don’t think I will ever fully trust a doctor again. Not because there aren’t good ones, there are. But because the whole system failed me for six years and continues to fail so many others. This goes beyond my single diagnosis or one doctor: it’s a systematic failure.

The importance of our community

One Instagram post, newsletter or blog about my experience will not change this, but I know that the disabled community will understand and for that I am grateful because together we stand a chance of healing. Every time someone feels confident and comfortable enough to share their story they are shedding light onto a hidden and widely misunderstood part of being disabled.

...what I didn’t prepare for was actually getting diagnosed

For non-disabled people there is often an assumption that all diagnosis takes is a quick trip to a GP who will confirm if you’re unwell or not there and then. If only it was that easy. When I spoke to disabled friends about my recent diagnosis success it was different to telling the non-disabled people in my life. I could tell they got the fear and trepidation that comes with every new diagnosis, with a new medicine regime, with a new medical team and new health labels to tick off every time you fill out any kind of health form. And when they made me feel understood it helped to make the diagnosis feel a bit more real, a bit more like a victory.

Copyright Not Your Grandma’s. All rights reserved.